What is Lariam (Mefloquine)?

Mefloquine, otherwise known as Lariam, is an antimalarial drug manufactured by Roche, which was approved by the FDA in May 1989.

Scientific findings made aware the dangers of Lariam even before the approval by the FDA in the United States. Approximately 0.7% of 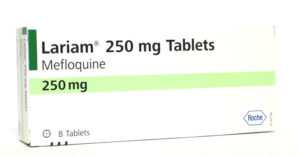 individuals who have taken the drug are expected to experience some form of neuropsychiatric adverse event, inhibiting them from carrying out otherwise normal activities. One study, in which there was a sample size of 486, showed that 42% experienced an adverse event which they attributed to Lariam. 29% of the subjects reported these events to be neuropsychiatric in nature and 19% were found to be “moderate or severe” cases.

There have been numerous side effects reported, which have been attributed to mefloquine. These include inter alia, paranoia, headaches, insomnia, anxiety, depression, hallucinations, self-harm and suicide. These side effects are known to persist for months and, in some cases years, even after an individual has stopped taking Lariam. There are a number of ex-members of the Defence Forces taking claims against the State, who are attending counselling and have been prescribed antidepressants. They stated to have never experienced these conditions before taking Lariam.

Various support groups have been established across the world for ‘Lariam Action’ including in Ireland, the United Kingdom, New Zealand, Australia, Denmark, Canada, Switzerland and the United States. Legal action has also been taken in a number of these countries since March 2001. A lawsuit was filed against the manufacturer of the drug in the U.S. by various firms.

Although Lariam was taken off the Irish market in 2016, it is still being made available for use in approximately 16 European countries.

HOW CAN WE HELP?